important News | The limit of OBC creamy layer is increased to 8 lakhs: 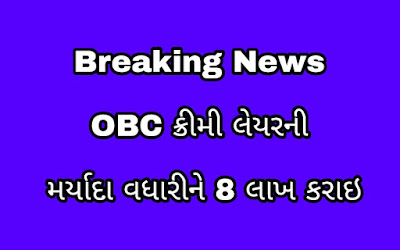 Union Finance Minister Arun Jaitley has announced this in this regard. He said that a panel will also be formed in OBC to review the subclasses. Jaitley said that after commissioning OBC quota, the Commission will report in 12 weeks. Commissions under Article 370 of this Constitution will be made. The commission will hand over the report in twelve weeks to appoint the chairman. Union Finance Minister Arun Jaitley has said that the Cabinet has approved the merger of public sector banks. Jaitley said that the structure for the integration of public sector banks will be set up.
Click here for Read Real News Source in Gujarati
Thank you for visit our website www.vibrantnaukri.in

Published in News, Notification and OBC